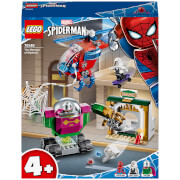 LEGO 4+ Marvel Spider-Man The Menace of Mysterio Set (76149) - Mysterio is robbing the bank! And he’s using his giant Mysterio mech robot! The mech wheels about, swinging its massive arms to smash into the bank’s vault. Spider-man swoops into action in his spider-copter. Ghost Spider speeds to the scene on her skateboard. Will Spider-Man grab Mysterio in the ‘copter's claws? Will Mysterio's mech be caught in Ghost Spider's web? You decide! There’s action, excitement and popular superhero toys in this LEGO® starter set for young builders. A great way to introduce kids to LEGO building and Marvel Spider-Man movie adventures. This cool action-packed toy comes with Spider-Man, Ghost Spider and a new-for-January-2020 Mysterio minifigure. Also includes Spider-Man's helicopter, Mysterio's mech and a bank that breaks open to reveal a toy vault! Mysterio wheels his mad mech to smash its powerful arms into the bank and grab the loot! Can Spider-Man race to the scene in his helicopter in time to stop him? Can Ghost Spider disable the mech with a blast of web? This LEGO® Marvel Spider-Man building toy will make a popular gift for kids’ birthdays and at Christmas. The building challenges and group-play possibilities are perfectly suited to boys and girls aged 4 and up. With the Spider-Man helicopter measuring over 5” (13cm) long and the mech over 3” (10cm) high, this superhero minifigure playset offers cool Spider-Man action with endless individual and group-play possibilities. You don’t need batteries for this superhero gift – kids just pick up and play! Hands-on LEGO® building toys help kids develop their creative thinking, imaginative role-play and problem-solving skills. Even young kids can build this Spider-Man playset independently, thanks to Instructions PLUS. This free interactive guide has fun zoom and rotate features and comes with the LEGO Life app for smartphones and tablets. LEGO® Marvel Spider-Man playsets encourage imaginative role-play with action-packed, superhero adventures. Kids can recreate movie scenes, make up stories of their own, or simply group their models into a cool display. LEGO® bricks and pieces meet the most stringent industry standards, ensuring they're consistent, compatible and able to connect and pull apart easily – and it's been that way since 1958. As well as satisfying the highest global safety and quality standards, The LEGO Group drops, squashes, twists, heats, bends, scratches and stretches LEGO® bricks and pieces so you can be sure they're safe for your child. Age: 4+ Number of Pieces: 163 Warning: Not suitable for children under the age of 3 years due to small parts which could cause a choking hazard.

Made by: LegoCategory: Lego Other