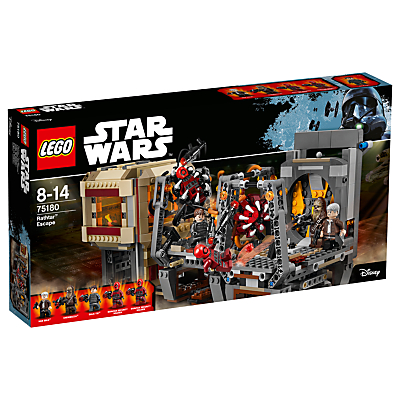 LEGO Star Wars 75180 Rathtar Escape - Escape from Bala-Tik and the dreaded Rathtars with the LEGO Star Wars 75180 Rathtar Escape set! Help Han and Chewbacca outwit Bala-Tik and his Guavian Security Soldiers aboard their freighter. Lower the blast door to trap them, hide under the floor for safety and then pull the fuse to release the deadly Rathtars! When you're done, rearrange the freighter sections and plan your escape all over again! Escape the jaws of the Rathtars with this modular freighter interior with lowering blast door, trapdoor with crawlspace, Rathtar release function and 5 mini-figures. Featuring a modular design for easy reconfiguration, the freighter sections contain authentic details like a lowering blast door, trapdoor and crawlspace in which to hide. Pull the correct fuse to release the 2 buildable Rathtar figures with posable tentacles and teeth, then rearrange the sections and play out another Rathtar escape! This great set includes 5 mini-figures.

Made by: LegoCategory: Lego Star Wars