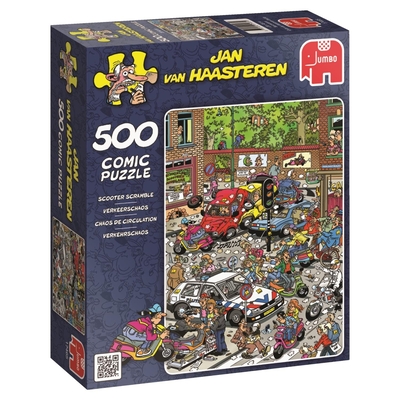 Jumbo 17465 Jan Van Haasteren Scooter Scramble 500-piece Jigsaw Puzzle - Jan van Haasteren's Scooter Scramble 500 piece jigsaw puzzle is a hilarious illustration that depicts an extremely chaotic traffic jam that is being caused by scooters nipping in and out of all the waiting cars. The puzzle image is brightly coloured and, like all of Jan's puzzles, features a variety of eventful goings on such as a young lady whizzing past several cars and causing them to literally bump into each other's 'backsides', two gentlemen naughtily enjoying a cold beverage whilst singing songs, an elderly gentlemen who has had enough of waiting and has decided to drive over a parked car that Saint Nicholas is wanting to get into and much much more. If this small taster of the illustrations in this puzzle sounds like your cup of tea, then don't miss out on the fun of piecing this puzzle together, because there are many more hilarious illustrations to be enjoyed. The finished puzzle is extremely colourful and is the perfect way to enjoy a few afternoons or evenings, because it is sure to keep you entertained as you laugh away at all the hilarious imagery you have produced.

Made by: Falcon JumboCategory: Jigsaw Puzzles